Wow! I still am not sure I have wrapped my head around what really just happened? I keep saying that to everyone who keeps asking how it went. I feel as though it hasn't quite set in. I have done so many races and half marathons, that to know this one was different hasn't quite hit. I think parts of it have hit but not all of it. I can't wait to see how God reveals Himself through the rest of this "first marathon" process. But let's start this recap and see where it leads us, shall we?
The week before I was a nervous wreak. I wasn't blogging because I didn't know what to say and I was trying to keep my mind off of it. I was very productive either, work was harder then normal it seemed like, making dinner and keeping the house clean was difficult, I just couldn't get my mind off of 26.2 miles. I went to the expo during my lunch break at work, which I was a little sad about because I had to go through it so fast. I have been to a lot of expos but this was BY FAR my favorite. Walking in on a red carpet, music blaring, friendly volunteers, it was all great. I found my race number, got my gear bag and shirt and headed out to start shopping! About a quarter of the way through I realized I should have called my aunt Laura, she was doing the half, and had to have been there too. I called and her and sure enough she was just picking up her bib. We met up, chatted for a while and then I was off again. I found so many great things I wanted, but I used restraint! :) I did get all of their cards though so I could shop online! At the end of the expo I was on my last row and I was wondering if Jock and Jill was there and sure enough I looked up and there was Chet! He gave me a hug and offered great encouragement, along with what I have been hearing all week, "are you crazy?"
The day before the marathon was work as usual, then my sister came into town! She had come from Pullman to see me race. So sweet! I had a different dinner, of chicken, baked potato and asparagus. I usually run the best when I have sushi the night before (I know weird right?) but our favorite sushi place is closed for re-model so I figured I should just eat plain food. Went to bed so early and slept okay.
Alarm went off at 5:20am. That is the benefit of living so close, plus AA knew back roads so after breakfast we got on the road and were there in 15 minutes! AA and Katie were able to park and walk with me to the start which was amazing. I was so nervous I was going to be all by myself and have a panic attack. AA found me the shortest porta potti line (true love :) ) and hung with me before I started to go to my corral. AA prayed for me, and I knew at that point it was me and Jesus. 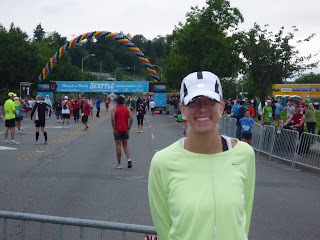 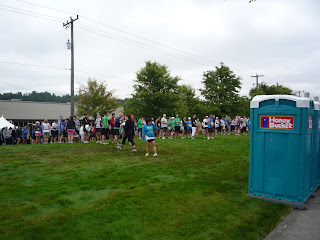 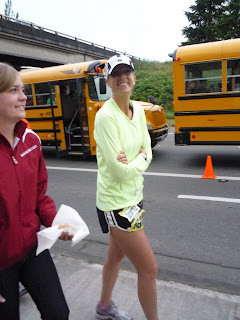 As I started to walk to my corral I heard a bunch of girls laughing. I turned around and shu dang who was it but the bloggy meet up I heard about, with a ton of bloggy women including Mel with Tall Mom on the Run and Jill with Running 2 Sanity, both I follow. I didn't really feel cool enough to be able to be in the picture with those awesome women so I just smiled and kept walking. I got into my corral and met a nice girl who was running the half. Before I knew it I heard Tina screaming my name! Tina is Laura's friend who has done Danskin Tri with us. Sure enough Laura made her way into my corral to give me a hug and wish me luck. It was so nice and made me feel a lot calmer. Met two more guys who were with Team in Training from San Jose! They were so funny and had just run Rock n Roll San Diego three weeks before! How awesome!
Well after 18 corrals, our corral was at the start line. I couldn't believe it. And as the horn went off and we were off I almost started to cry, but I was smiling too much! This was going to be my victory lap no matter how much it hurt. So we were off and I smiled as we went through this GIANT blow up thing that was over the road, a guy rocking out! Then all of a sudden I looked up and who did I see? Jill from the blog I follow! She doesn't know me but I have been reading her posts about running and Jesus. She was running with a friend but I yelled out "Jill I read your blog and love it!" She laughed and yelled back "Thanks! How are you?" She was so nice! I ended up seeing her a lot throughout the race which was really nice actually. We would smile and cheer each other on. Not right after I saw Jill I looked to the side of the street and saw Suzie from the Biggest Loser!!! I have seen her and her husband Matt at the mall before so it wasn't to big of shock but it still made me happy, (Matt won the Biggest Loser and him and Suzie married after they met on the show. They now live in the Seattle area and he does a lot of races).
As we approached mile 3.5 I spotted Katie and AA in the crimson...GO COUGS...I cut people off left and right to be able to say hi to them, sorry people! I told them I saw Suzie and other runners around me laughed. We kept going and as we came down onto Lake Washington Blvd and there were so many people on the side of the road with American flags! There were people in army fatigue and motorcycle guys and gals! It was a great support.
Around mile 7 I knew I needed a GU, good thing there was a GU stop coming up. I downed a GU and water and started to look for AA and Katie. They were up ahead with Meg and Chris!! Yea! I love my support crew! It was time to change and get out of long sleeve. 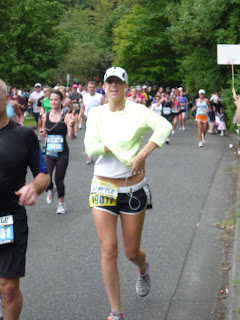 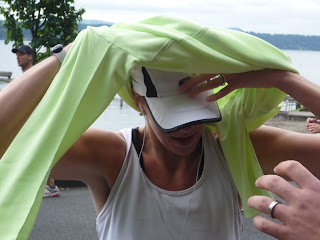 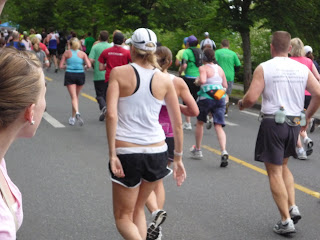 Once I got the shirt off I knew I had to get to work. This was the same run/bike course as the Danskin Tri so I knew we had a lot of flat to go, until i-90. Once I climbed the hill up to i-90 the half marathoners and marathoners split. I prayed and asked Jesus to give me His strength and power. I then heard a husband scream at his wife "to get going, go get em, you're going to kill this, I will meet you at the finish, you are my hero!" Oh I almost could have just died right then. The wife was going onto the full and he wanted to make sure she knew she was strong. So SWEET! The wind was tough on the bridge and that is when I started to think that I was in for the long haul. ...
That is all for now...more miles to come....