So as the full marathoners started our jog across the lake I looked to Heaven and said out loud "okay, Mom you and I for the next 2 miles." I needed her memory and strength to get me across this bridge, the same bridge that she had dominated so many times, so many years ago during Danskin., (tears starting as typing). She was the one who gave Katie and I the ability to see what was possible for women, to push beyond our comfort zone and to find the possible in impossible. So as the wind blew at my face, hard on the bridge, I got to the end and turned around and headed for the tunnel with full confidence that she was watching.
I saw Mel (tall mom) on the bridge, and called out "You go Tall Mom!" She looked right at me and smiled and yelled! I loved it! Thanks Mel for the boost. Got into the tunnel and realized how loud the music was. I couldn't hear my own earphones over the booming music. But as I got closer I realized it was a DJ, not a band, which was a nice change. He was smiling and going crazy! It made me smile, too.
I took a water at the end of the bride and looked up. What did I see but the 13 mile sign. We were half way, and although my stomach was still giving me problems I felt as though my stride was strong. I checked my watch and realized I had run a really slow half, at 2 hours 10 minutes. I haven't run that slow in over a year, but I tried not to let it bug me. I was in this for the long haul, plus I wouldn't have given up for the world stopping to see my support crew and giving all of the American Flag guys a high five. No way, jose, I was going to get the full experience.
As we came off I-90 I knew I would see AA and the crew soon. I kept my eyes alert and sure enough that crimson stuck out in Seattle, as it always does. I veered right to take a GU and water, recharge time! I saw Nathan and Jerry as well, my in-laws! They had come from Mt. Vernon, made signs and everything. I thought to myself, where is Linda Lou (my mother in law)? But sure enough after GU I heard someone yelling my name and there was Linda to greet me for a sweaty sweaty hug. How sweet to have people who love you, rooting you on. 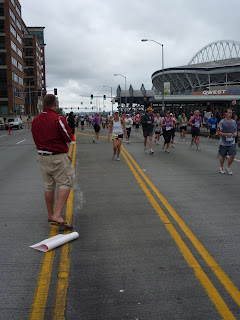 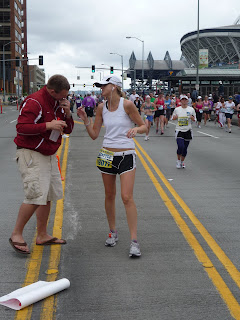 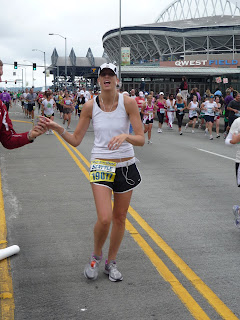 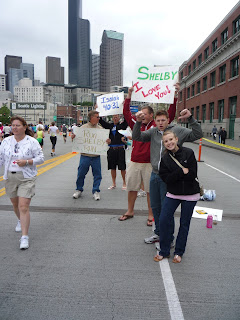 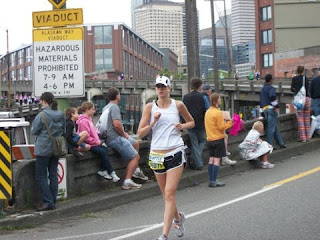 Here I come off the on ramp...finish here I come! 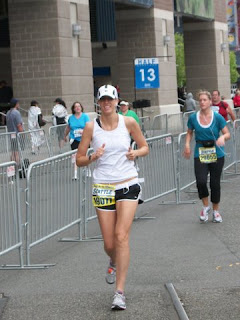 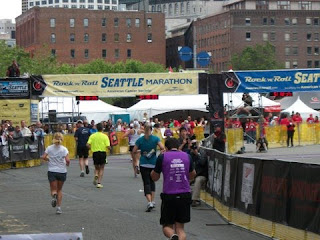 There I am...finishing my first marathon!!