Wow...where do I start? It is always so hard to recap a race, because for almost all of my races there has been so much emotion going into it. This one was no different. But I will try...here is the weekend recap:

Friday: Our plane was supposed to leave at 9:15, arriving in Dallas at 4:15 (time change of 2 hours). Well we got on the plane, started to taxi to take off and then we realized we were headed right back to the gate. Hmm? Weird. Oh ps...if you don't know...I am SO SCARED of flying. It is something that I am seriously trying to deal with. Lots of prayer....LOTS! So anyway, we got off the plane and got on a new one. Total delay....2 hours. BOO! Had to stop in Albuquerque to drop some passengers off and pick some up on the way to Dallas. Well to say that it was a smooth landing would be the farthest thing from the truth. It was the most turbulence I have ever experienced. I was crying and telling AA "I can't do this" over and over again. People were starting to look. Awesome. I was "that" girl. AA, being the amazing man he is, tried to calm me down, which didn't work. He even said "you have to do this, what is the other option?" Great point AA, great point. Well anyway, we landed. Some people even clapped. Yup, it was that bad. I asked the flight attendant if the take off and landing were going to be that bad going to Dallas. She said no, and she was right, still bumpy but no where even close to that. Ugh! Way to start off the weekend.

Aywho, landed in Dallas, sans makeup after crying it all off. Katie and Rob dog were there to greet us! It was HOT! And we loved it!! They took us to their AMAZING new home so I could put more deodorant on (because somewhere Seattle and Dallas I had some massive flop sweats), and for goodness sakes put some mascara on (remember that whole crying thing?)....geez I looked horrible! Then we went to dinner and ice cream at their favorite spots. SOOOOO GOOD! 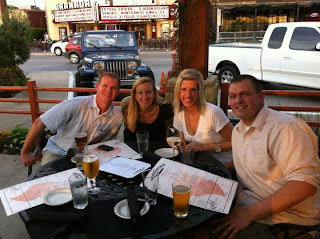 We even got to walk there, so it felt like West Seattle. Went home and watched some basketball and I pretty much fell asleep right there after all that emotion from the day. WOW, was I glad to be in Dallas.