I didn't sleep very well the night before the race. But alas at oh dark hundred hours the alarm went off and we were moving! We took the Dart to the start (Dallas' version of light rail). The funniest part was that they don't take credit cards and so Katie stuck a $20 bill in to buy all of our tickets and sure enough it spit out ALL coins for her change! HAHA! Rob carried more then $7 in change all 13.1 miles! So funny! Well we finally made it to the start area, made a MUST potty stop and then got in our corral. It was traditional Texas to the core! Dallas Cowboy cheerleaders, Troy Aikman starting the race, the National Anthem and a prayer for the race. Let me stop and tell you about this prayer real quick. I didn't even realize they were praying until I heard "oh God." I started to listen more intently and I realized she was praying not only for all of us runners, but also for every affected by breast cancer (Susan G. Komen was the officially charity). I tried so hard not to cry as I look straight at the ground, but man this lady was praying from every corner of her heart. It was so sweet, because so rarely does anyone do an "out-loud" prayer before the race, but she was and she was letting God's name be proclaimed! I loved it! With a hug from Katie, a high five from AA and some funny comment by Rob dog it was our corrals turn to GO! We were off! We lost Katie and Rob pretty quick. They were on a mission to have a sub 2 hour half (which they did! GOOD JOB!). 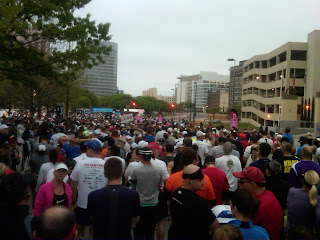 In the first mile we ran right by where JFK was shot. People were pointing to the ground and when we looked we realized that there were two X's where he was shot twice. It was very eerie, but also so cool to be running literally right over such a historic moment. As the race plugged along I knew very soon that my legs were not firing as they should be. I felt sluggish and heavy. We climbed a couple minor hills and AA slowed at the top to wait for me. He was doing amazing and I t old him to go if he wanted/could. He said NO with some authority so I knew he was staying with me the whole time (more on this in a sec). At mile 4 I broke out 2 watermelon GU chomps. YUM YUM! It also gave me something else to think about. About that time, a woman started to pass me and she gave me the thumbs up, smiled and said something about love. I was rocking out to Beyonce or Lady Gaga (I know surprise surprise) so I didn't exactly hear what she said. I smiled back and realized that she was talking about what was on the back of my shirt. I had a bib that said "In memory of my mom." It was so sweet that she would acknowledge that. After I realized what she was saying I started ot tear up. Just as fast as I started to cry I quickly told myself "okay silly goose you better get it together....we got 9 more miles to fly through...toughen up butter cup." Which I did. At mile 5 AA hears a pop in the back of his calf. Uh oh! He told me to keep going and he would would catch up. Which of course he did. He said it hurt but that he would be able to make it (turned out to be a minor calf strain). Before the race Rob dog and Katie kept saying that they couldn't wait to get to Swiss street because it was slightly downhill for about a mile and half. However, I heard "Spring St." Oh I am an idiot! So with every turn we would make I would look at the street sign and pray it would be Spring St. No freaking Spring St. ANYWHERE! I finally asked AA "Where in the H-E-Double hockey sticks is Spring St!!!!!!!!!!???????????" He told me it was SWISS ST! And that we were on it! Oh gosh, I am an idiot! HA! I had a pretty good laugh with Katie after the race about that one. Finally at about mile 8ish we saw Rob's mom, dad and brother. We all went crazy! It was so nice to have them come out and route us on! The funniest part of all of that is that they missed Rob and Katie (their own kids for goodness sakes!) because they were running to fast! No worries...you can watch us slow pokes! :) Right before we saw them I was having extreme hip pain. I walked for about 10 seconds and then started to run again and felt good. It hurt a little bit here and there but nothing like it was. My legs were finally starting to fire, a little too late, because AA was starting to feel it. And to put it simply there was no way I was leaving him (more on that in a sec). Finally after a GU stop and 2 miles through a not so nice part of Dallas we made it to the Texas State Fair. It was so cool! It is where the Cotton Bowl is played and where OU and Texas play their big game every year. AA and I watch every year and so it was cool to finally see it in person. We were rounding corner after corner and I knew the finish was coming soon. We passed the mile 13 sign and I knew we were close. I could smell the finish. AA was struggling and I told him a little sternly "get up here!" We were going to finish strong even if we died trying. I kept telling him how many minutes until we finished, "2 minutes, 1 minute." And then finally we turned the corner and there it was, the finishers shoot. I started to cry for so many reason. I took AA's hand and we ran the last little part hand in hand, AA being the strong stoic one and me be the blubbering fool. There is a surprise. We crossed the finish line with huge smiles, holding hands, arms held high. I knew we had made our goal of 2:15. In fact we were at 2:14:08. Not my fastest, not my slowest. I smiled at AA, trying not to burst into tears. I silently thanked Jesus for His power, grace and love. I thanked Him for allowing me to run this but more importantly that I got to run this race with my husband. I get chocked up thinking about that moment. As I type I am getting tearing eyed. AA and I have been through the ringer the last couple months and we didn't even know if I would be able to run this race. To be able to go through 2 hours, 14 minutes and 8 seconds of pain together, but to be able to cross the finish line with my best friend, partner and love of my life was one of the most symbolic moments in my life. I will NEVER forget that moment for as long as I live. AA has been by my side and he never had any intention of leaving me during this race and when we got further into the race I realzied that I was not leaving him either. It was such a tangible moment of our vows and I could cry about it for a long time, to remember how good God was in giving us each other. 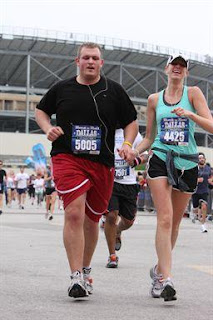 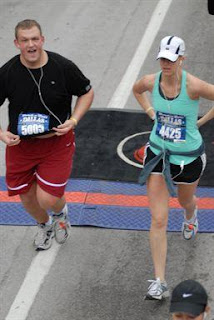 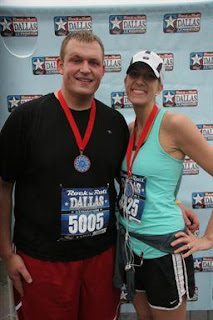 God was so good to us during the last two months, as He has been our whole life. But during this time, He showed us what it meant to rely on Him, to be a good spouse, to trust Him and to love Him unconditionally. Never have I been more thankful to have a personal relationship with Him. He was my ultimate rock and my saving grace when the earth around me was sinking. All along the race coute there was signs with Isiah 40:31. That is the verse I have as the title of my blog and what really has made a profound impact on my life. It was like Jesus was reminding me every time I saw one of those signs how amazing He is. This half marathon, although not my fastest, not my most pain free, was by far my favorite. The rest of the weekend recap coming next!
Posted by Shelby at 8:15 AM